The Central European Institute at Quinnipiac University recently hosted a group of executive MBA students from the Hungarian Corvinus School of Management as part of an ongoing partnership. 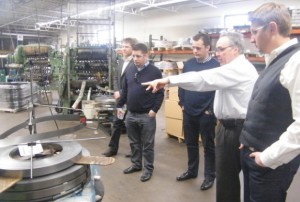 “Quinnipiac University partnered with the Corvinus University in Budapest, Hungary in 2007,” said Christopher Ball, associate professor and Istvan Szechenyi chair in international economics in Quinnipiac’s School of Business. “Since 2008, the Corvinus School of Management has hosted a visiting Quinnipiac School of Business MBA group in Hungary every June for two weeks and we have been hosting an MBA group from Corvinus for one week in Connecticut since 2009. Students participating in these exchanges not only get an introduction to other countries and cultures but also to modern global business practice.”

Quinnipiac is a private, coeducational, nonsectarian institution located 90 minutes north of New York City and two hours from Boston. The university enrolls 6,200 full-time undergraduate and 2,300 graduate students in 58 undergraduate and more than 20 graduate programs of study in its School of Business and Engineering, School of Communications, School of Education, School of Health Sciences, School of Law, Frank H. Netter MD School of Medicine, School of Nursing and College of Arts and Sciences. Quinnipiac consistently ranks among the top regional universities in the North in U.S. News & World Report’s America’s Best Colleges issue. The 2013 issue of U.S. News & World Report’s America’s Best Colleges named Quinnipiac as the top up-and-coming school with master’s programs in the Northern Region. Quinnipiac also is recognized in Princeton Review’s “The Best 377 Colleges.” For more information, please visit http://www.quinnipiac.edu. Connect with Quinnipiac on Facebook at http://www.facebook.com/quinnipiacuniversity and follow Quinnipiac on Twitter @QuinnipiacU.